Originally written by Tony Markl, the article below has been edited and adapted by Benjamin Ward for application in the UK. Tony Markl was a very experienced tail-wheel instructor, clocking up over 17,000hrs in over 40 types of tail wheel aircraft. The original article can be found here.

When should a Wheeler Landing be done?

What is a wheeler landing?

Firstly, a wheeler landing is considered to be more difficult than a 3-point landing, which is why many pilots avoid attempting them. For this reason, regular practice is important on all surfaces in all conditions so that when a wheel landing is actually needed – the pilot feels comfortable and is able to successfully complete the landing. However, pick the practice runway carefully – narrow runways with dangers for running off the side are a bad idea. Grass runways with clearance either side is a good idea.

Think of the skill level similar to a good PFL – regular practice should be undertaken so that if there is an engine failure, you are able to perform the PFL when the time matters.

Pilots should make a conscious choice about which landing to perform when on the downwind leg. Good practice should be to verbalise this – if only to yourself. Changing your mind on final will only increase the workload, and is likely to lead to a sub-standard landing.

When performing a wheeler landing, do not concentrate on touching down on the numbers, as this will most likely result in excessive rate of descent, leading to a bounce. Using sideslip on final, touch down on the upwind wheel first. If control is maintained, touch down the downwind wheel and then complete the landing if control is still maintained. Use approximately 1800rpm for better control during the approach. This will also make the touchdown last longer, giving a slower deceleration and more time to “feel” for the runway. 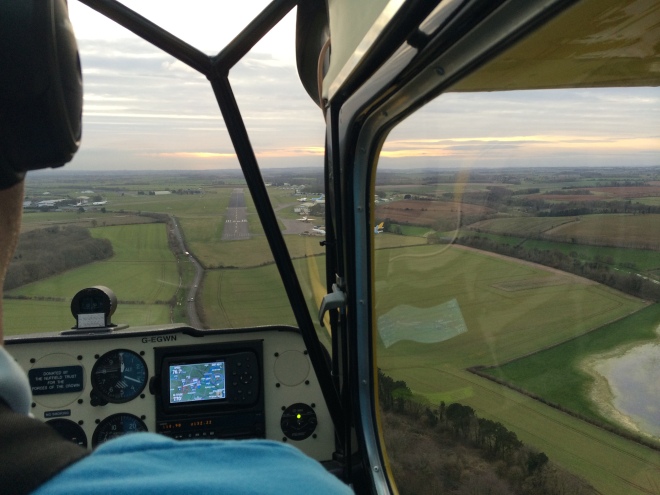 Approach speed should be at least 10% faster than the normal approach speed, especially in gusty conditions. A helpful technique may be to leave the elevator trim at approximately the cruise setting. This will give a nose down force on the stick, and remind you that you are intending to perform a wheeler landing, as well as keeping the aircraft descending during the transition to touchdown.

Look towards the end of the runway and “stair-step” your way down. Stair-stepping is the technique of continually moving the stick forward an inch then right back to where it was until the aircraft has touched down. Three to five stair-steps will make a nice touchdown, avoiding any bounce.

Do not look at the airspeed indicator below 200ft or during any part of the transition.   If the touchdown speed is not high enough, or the descent rate low enough, you will touch down in a 2½-point attitude with not enough speed, leading to bouncing between the main gear and the tail wheel. After about 5 or 6 bounces the aircraft will run out of energy and stall. If you are bouncing, and the wind is not such that it requires a wheeler landing, you may convert to a 3-point/full-stall landing at this time by bringing the stick all the way back. Do not convert to 3-point unless the aircraft is pointed down the runway and is at a height at which you are willing to stall, and there is NO drift. 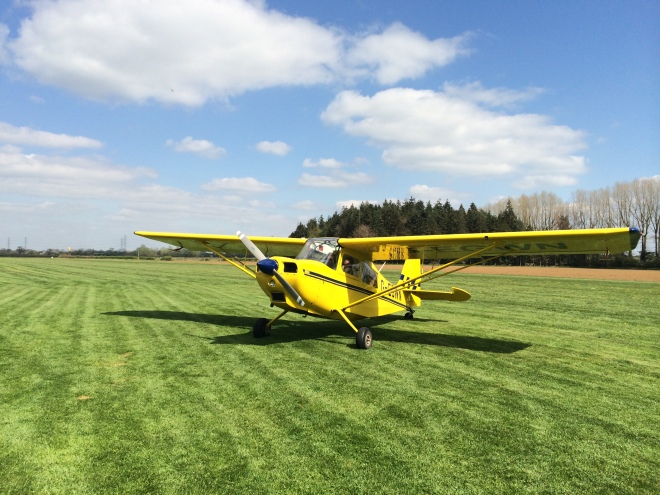 As soon as you know you have touched down on the windward wheel move the stick forward. This goes against the grain for nosewheel pilots. Everyone worries about a prop-strike. In a few aircraft with long noses or big props this can be a consideration, but for typical aircraft such as Champs and Cubs, do not worry. The aim is to maintain the best possible control of the airplane for the longest possible time. Having the tail up high gives better control at a time when we need the best possible steering. When speed drops and the nose starts to rise, meaning tail is starting to come down, move the stick fully backwards and get best steering by use of the tailwheel.

Reduce power to idle when you are sure you can make a full stop landing, not before.   After touchdown, whilst decelerating, is when most wheeler landing accidents occur. The higher touchdown speed of a wheeler landing gives you more rudder and elevator authority and directional control. After touchdown, increase aileron input until you have full aileron into the wind to prevent the upwind wing from rising. “Tiptoe” down the runway, only making small rudder inputs.

When first learning wheeler landings it is acceptable to continuously wiggle the rudder. However, it is not acceptable to put in a correction and wait to see the effect. If you swerve in an amount that makes you uncomfortable, the correct procedure is to “go around”. If you wait too long, a “go-around” becomes a poor idea and you should consider accepting the indignity of going off the runway, as long as the terrain in front of you is OK.

In strong wind the aircraft may stop quickly, and your biggest problem may be taxiing to a tie down. If this is the case, get a wing walker to hang on to the upwind wing. Maintain aileron input, and keep on “tiptoeing” down the runway. It is more important to stay parallel to the runway than it is to stay in the center. If you are parallel and on the side, be happy, do not try to go back to the center. When the aircraft has slowed down to a safe taxi speed, vacate the runway and congratulate yourself on a successful wheeler landing!

Night FlyingOctober 29, 2016
Night flying will start when the clocks go back on